From The Binding of Isaac: Antibirth Wiki
(Redirected from Astrological Signs)
Jump to: navigation, search

For a list of other rooms featured in Antibirth, check out Chapters. 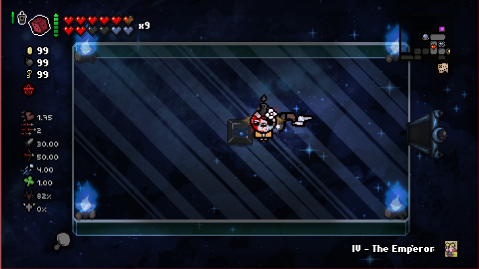 The Planetarium is a new unlock-able room type introduced in Antibirth that has a small chance to appear after certain criteria are met. Like Treasure Rooms, they require a key to enter.

Planetariums are unlocked by acquiring three astrology-related items in a single run. These items include the Signs of the Zodiac, Tiny Planet, Magic 8 Ball, and Crystal Ball.

The chance for a Planetarium to appear starts at 1% and will increase by +20% whenever a Treasure Room is skipped. The Treasure Room must not be entered at all to be considered skipped. This chance is further increased by an unknown percentage if Isaac has Magic 8 Ball or Crystal Ball. If Isaac enters a Planetarium, the chance will be set to 0% and can't be increased again

These rooms also have a chance to spawn in the purple-tinted areas of the Mausoleum, without Isaac previously skipping any Treasure Rooms.

Planetariums are similar to Treasure Rooms, but only contain special astronomy-themed items that are only available through Planetariums. They may also contain Signs of the Zodiac.

If a Planetarium spawns on one of the alternative floors where Treasure Rooms would normally have 2 items to choose from, the Planetarium may still only have one item with no other choice available.

Zodiac collectibles from the base game are placed in Planetarium item pools: