From The Binding of Isaac: Antibirth Wiki
Jump to: navigation, search 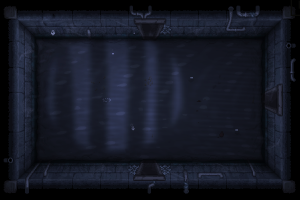 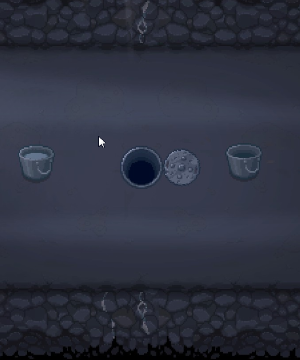 A hatch, leading to Downpour

Downpour is a new environment added in Antibirth.

Treasure rooms in Downpour always have two items to choose from.

After "A Secret Exit" is unlocked, a locked door to Downpour I or II will appear upon completing The Basement/Cellar I or II, respectively. The locked door requires a single key to enter.

Downpour resembles flooded sewers, with water reflecting the environment. Its enemies are water-themed and mainly shoot tears, like Isaac, instead of blood. Under certain circumstances, after killing all enemies in the room, several Gapers will emerge from the water to attack Isaac.

Downpour is the only one of the four new added chapters in Antibirth that can contain a Rebirth boss that isn't the Fallen (the Haunt).

The Downpour features a heavy emphasis on water and flooding. The entire floor is submerged in a pool of waist-deep water, that some enemies such as Small Leeches and Striders are capable of using to swim over pits. Numerous Deep Gapers also hide beneath the water and emerged when all enemies in the room have been killed. The reflection visible in the water is also utilized by Wraiths, which they are always visible in even though they are invisible otherwise. There is also a storm playing out in the background, which when lightning strikes, brightens up the room and reveals any Wraiths in the room.

The Downpour is also home to many incorporeal elements as well. Appearing in this level are Polties and Mullighouls, along with the invisible, ghostlike Wraiths, in addition to the returning Rebirth boss The Haunt, which coupled with the darkened environment gives the level a rather supernatural feel.

Bug! Some projectiles on the water's reflection are wrong. Noticeable with Azazel's Brimstone shot to the left, right and up; Mom's Knife, and the Spirit Sword's spin.
Retrieved from "https://antibirth.gamepedia.com/index.php?title=Downpour&oldid=16228"
Categories: